The History of Pickleball

You may think of pickleball as a brand-new sport, but would you believe us if we told you that pickleball has been around for over 55 years? That’s right. While it is currently the fastest growing sport in America, pickleball has been around since 1965. All of the dinks, slices, and OPA’s have been around longer than ATMs or emails. It may be a fast-paced sport suited for the whole family today, but let’s take a closer look at how we got here. Here’s the history you need to know about pickleball.

Pickleball was created back in 1965 by three fathers (Joel Pritchard, Barney McCallum, and Bill Bell) looking for a new way to entertain their families. They had initially set out to play badminton, but they improvised with paddles and a plastic ball after being unable to locate the necessary equipment. The net was quickly lowered from the 60-inch height used for badminton to the 36-inch height still used in pickleball today. The following weekend they wrote the pickleball rules, and the first official court was erected two years later in the backyard of Pritchard’s neighbor Bill O’Brian’s home. By 1990, pickleball was being played in all 50 states. Today, pickleball is enjoyed by over 4 million people annually.

1975 - An article is published by The National Observer, causing a major spike in popularity.

1976 - The first known pickleball tournament is played in Tukwila, Washington.

2002 - The first National Championship Tournament is held by the Villages, Florida.

2008 - The Official Tournament Rulebook is published by the USAPA.

2010 - The International Federation of Pickleball (IFP) is formed.

2015 - Pickleball is recognized as the fastest-growing sport in America.

2016 - The USAPA launches a Juniors Program to grow the sport for players aged 7-19 years old.

2018 - Fran Myer becomes the first woman inducted into the pickleball hall of fame.

2019 - The APP Tour is launched in June creating the first sanctioned pickleball tour ever.

2021 - JustPaddles is launched to provide pickleball players everywhere with the best pickleball paddles from all the top brands!

Where was pickleball invented?

Pickleball was invented on Bainbridge Island, Washington. Just a short ferry ride from Seattle, Bainbridge Island was initially inhabited by the Suquamish Tribe, but a treaty was signed in 1855 granting the land to the US government. Nowadays, around 24,000 people populate the island.

Pickleball is an addictive sport that combines the elements of badminton, tennis, and ping-pong into one easy-to-play game. Pickleball uses paddles, a perforated plastic ball, and a net. All games are played to 11 points, with the stipulation that the winning team must win by two. Only the serving team can score a point. You can play singles or doubles, and many players prefer to play pickleball over tennis because it’s less physically demanding. Pickleball can easily be enjoyed by players of all ages.

What is the USAPA?

The USAPA is the United States of America Pickleball Association. They serve as the governing body for pickleball tournaments and provide the official rules for the game. Its mission is to promote the development and growth of pickleball in the United States and surrounding territories. They are a nonprofit organization overseen by a board of directors. If you are interested in learning more about the USAPA, please visit their website at https://usapickleball.org.

As pickleball began to be played at a competitive level, a need developed for a tool to compare player abilities. As a result, the USAPA designed and funded a rating system. The original ratings, ranging from 1 to 5, provided an easy way for players to be appropriately placed in leagues, clubs, and tournaments. As players continued to advance the game and improve their skills, the USAPA began to acknowledge players above the 5.0 threshold. Today, the maximum two-digit pickleball rating is 6.5.

We have just tipped the iceberg with the potential growth of pickleball. The future is bright, and we are excited to see new players take the court every day. But as you step on the court, be sure to play with the same joy experienced by the Pritchard, McCallum, and Bell families on Bainbridge Island back in the summer of ‘65.

If you ever have any questions about pickleball or finding a pickleball paddle, we encourage you to contact our Paddle Experts. Our knowledgeable team is available to answer any of your questions. You can contact them via phone at 866-382-3465, email at experts@justpaddles.com, or live chat. We’re JustPaddles, and we’re with you from Click to Court! 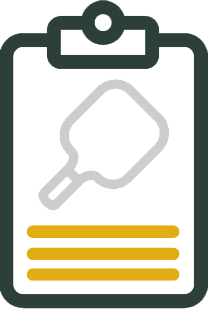 TRY OUR PADDLE COACH
Answer a few simple questions to find your perfect paddle.
Filed Under: Industry News Pickleball
You can compare a maximum of four items.
Please remove one item to add another.
Add up to 4 items to compare.
Compare (0 of 4) Show Comparison
ERROR