Neil Friedenberg loves pickleball. As the President and Owner of PROLITE Sports, he oversees the day-to-day operations of one of the top pickleball brands in the game today. JustPaddles sat down with Neil to discuss PROLITE Sports, pickleball paddles, pickleball, and everything in between. Enjoy this deep dive on one of the leading companies in the business and learn all about items such as how PROLITE got started, the story behind the brand, and where Neil sees pickleball in five years. Let's dive in.

What is the origin of PROLITE and how did it Start?

PROLITE was started in 1984 by a father and a son, Arlen (father) and Steve (son) Paranto.  Arlen was a Boeing engineer and developed paddles made from floor panels in the garage of their home.  The ratio between the weight of the ball and paddle now matched the same ratio they saw in tennis racquets and balls.  PROLITE originated in the Northwest, the same place the sport originated.  From then on, it became the frontier of pickleball and the technology quickly revolutionized the sport and how it is played today.

When did you start playing pickleball and why?

The first time I ever played pickleball was back in the late 1980s.  My father’s place of work put in a pickleball court in the fitness center area adjacent to a racquetball court.  We often played singles since I played tennis at the time.  It looked fun and immediately compared it to ping pong and tennis combined.  It brought us out on the same competitive floor against each other.  After getting my butt whooped, I knew immediately I was drawn to this sport.  That was well over 30 years ago.  I later played in my PE classes in junior high since it was part of the curriculum.  We played mini-tournaments in class.  So much fun.

What’s the story behind how you got involved with pickleball and PROLITE?

It dates back to even before I had the opportunity to take the helm of PROLITE.  I have been obsessed with sports since I was about six years old.  Shopping with my parents at a sporting goods store was like a kid going into the candy store.  I would often get lost gazing at, examining sporting goods equipment, often wondering why they grabbed my attention.  Hockey sticks, golf clubs, racquets, you name it.  In 2011, my father was running PROLITE more as a hobby.  It was fun to him and he loved the game so much.  I thought about it in the sense of how we can bring more diverse products to the PROLITE name.  Different paddles, technology, gear.  My mind was racing, as it always does, and I hit the ground running after purchasing the company in 2011.  It brought that sense of enjoyment that I had as a kid at the sporting goods stores.

Who is your pickleball mentor?

I would have to say my father.  He instilled a lot of knowledge about the game in me.  How you play, tendencies of your opponents, the soft game.  All that said, what really sank in about the game and what he taught me was how the sport of pickleball was the fountain of youth.  It adds years to people’s lives, saves lives, adds a social aspect of sports that is like no other, a truly special sport.  He saw this so early on before it was popular.  He envisioned it becoming part of the school’s sports programs and eventually into the Olympics.  As far as my mindset in business, he had two sayings he had learned that sunk in with me forever.  “If not you, then who?”  “If not now, when?”  Still resonates with me in all aspects of life and business.

What makes PROLITE unique compared to other paddle companies?

PROLITE is definitely a unique company.  Not just in our products, but in our philosophy.  We believe in being different, choosing a pathway that is more than likely less traveled by our competitors.  We not only are a legacy brand that saw the benefits of pickleball and engineered advanced equipment early on, but we are enthusiasts of the sport ourselves.  We live and breathe the game.  One major difference is how we utilize our team of players.  You may not see them in the major tournaments such as the PPA, but you see them at many other tournaments locally and regionally.  You see them teaching the game to their local communities.  Most are advanced players as well.  We went down the road of sponsoring the big names.  In fact, we had quite a team of professionals.  However, after analyzing the ROI and seeing where the game is exponentially growing, we completely changed our philosophy.  To us, and I have said this to many until I was blue in the face, professionals in the sport are the players at the courts representing different demographics and professions.  Teachers, police officers, firefighters, nurses to name a few can all be seen at the courts playing the sport we all love.  They are also vital to the community they are in.

Can you give your number one top tip for someone just getting started in pickleball?

Difficult to just name one, but I would say you will fall in love with this sport.  It brings so much to you, your family, physical and mental health.  Everything.  When looking for pickleball paddles, find a company dedicated to pickleball that offers a wide range of paddles for all levels and backgrounds.

What is your favorite activity outside of pickleball?

I love all sports for the most part.  Outside of pickleball, it would be spending time with my family exploring a new area, hiking trails, playing basketball and baseball, hitting golf balls.  Basically decompressing with loved ones.

Can you explain the LX pickleball paddles and what benefits players might see from these paddles?

At first glance, you will see the 3K cross weave carbon fiber interwoven with either gold or silver threads.  The weave is much tighter and stronger than anything we have used before.  Not only that, but it has a very authentic feel to it.  Powerful for a carbon fiber paddle.  Our flagship 14 MM thickness adds that perfect blend of reaction, dwell time, and crispness at impact.  It truly is different.  When you look at it, it screams luxury.  Just an overall beautiful, high-performance paddle, and BELOW $200.  We could have been like the others undoubtedly.  BUT, we don’t need to be and that is not our style.  Make it more affordable for everyone.  Performance-wise, a player using the LX line will feel that overall blend of touch (carbon fiber), higher deflection with increased vibration dampening (14 MM versus 15 or 16 MM), and increased hold/spin (tightly woven carbon fibers).  It also has our brand new Aero Channel Edge (A.C.E) and the hybrid end cap we developed to bring tennis and pickleball together with a more detailed end cap than the norm. 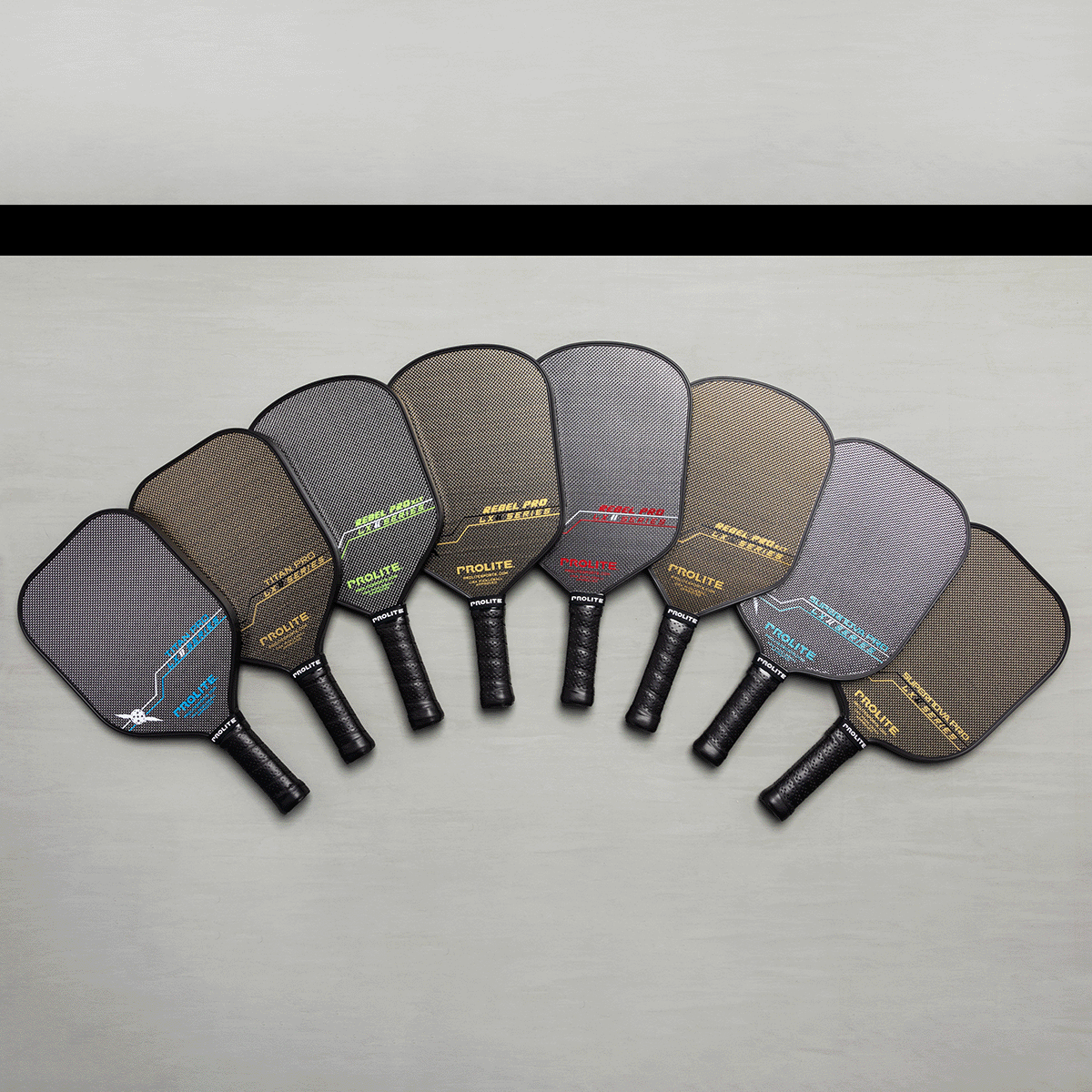 PROLITE is a family-run company. What made you choose Wisconsin as a home base?

I moved from the Seattle area in my 20s and ended up finishing college in Wisconsin.  Eventually, I met my wife and we settled down in Port Washington, Wisconsin along Lake Michigan.  Beautiful area and it had a certain similarity to the Puget Sound in Washington state.  The midwest has a strong work ethic and is such a strong family-oriented area of the US.  It made complete sense to have it all here.  Our production facility is in Milwaukee, a city that has a rich history in manufacturing.

Where do you see pickleball in five years?

I see pickleball continuing to explode among all ages, but especially the teens and the 20 somethings.  I believe pickleball will be offered at high schools as a team sport and intramurals in colleges, maybe even major athletics.  That is the dream.  As a bonus, if it becomes more professional, it will need more major corporate sponsorships.  Then the Olympics!  BUT to us, we value all of this, but the grassroots growth is vital.

What’s the most unique thing about PROLITE paddles?

You will see a variety of shapes and headweights that were carefully chosen to create a transition for all players and their backgrounds.  Our shapes, materials, balance points are all different.  Our job has always been to create paddles, but for who?  That is what we ask ourselves all of the time.  It does not only have to pertain to sports/athletic backgrounds but also price points.  Families, fixed incomes, high performance, everything comes into play.  We are a brand and a paddle company for the people.  Pros, sure.  We sponsored many and still do, but our focus is on grassroots pickleball.  Grow the game, grow the brand, grow the player.

If you could sign one influential athlete outside of pickleball to be a part of PROLITE, who would it be?

Russell Wilson.  He fascinates me.  The intense work ethic, the belief in himself and others around him, the constant positive mindset that he or the team or a project WILL succeed.  Why not you?  Why not us?  If you continue to believe in something, it can happen.  His character and the type of person he is speaks for itself.  I think he would be a great asset to PROLITE and a natural leader.

Can you describe how PROLITE paddles are made?

No problem.  We build our paddles into series.  Series of paddles are specified by the materials and specifications for each.  For instance, the PowerSpin 2.0 Series is defined by its 14 MM core and more reactive fiberglass than we have ever used.  The deflection of this type of fiberglass truly is different from the norm.

What are your inspirations when you’re designing new paddles - do you look at outside industries when thinking of new technologies?

100%. I have the type of mind that does not really have that shut-off switch.  I think you have to be.  I know how to prioritize, but the goal to innovate and brainstorm, then bring to market is probably the best part of the job and one that I am very passionate about.  I absolutely love it.  I look across all sports as much as I can.  I analyze technologies that can also become part of pickleball in some way.  It is part of who I am.  A sports nut.  Just naturally curious and the desire to be different, to be a leader in the industry without being the follower.  There is a lot of that in this industry.  Being unique, being different…you either embrace it or you don’t.

Thank you, Neil, for answering some questions. If you have any pickleball paddle questions, please feel free to give our friendly Paddle Experts a call at (866-382-3465). You can also shoot them an email at experts@justpaddles.com or click here to live chat. Don't forget, we'll be here for you from Click To Court!

Chat Us
You can compare a maximum of four items.
Please remove one item to add another.
Add up to 4 items to compare.
Show Comparison
ERROR